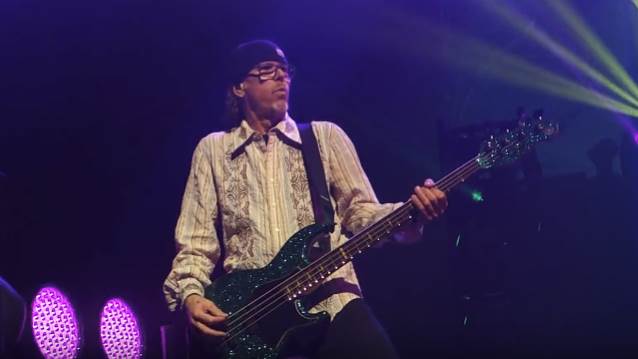 POISON bassist Bobby Dall was recently interviewed by Meltdown of Detroit radio station WRIF. The full conversation can be streamed below. A few excerpts follow (as transcribed by BLABBERMOUTH.NET).

On POISON touring in consecutive years after taking a five-year break from the road:

Bobby: "With POISON, you just never know. We're working on next year right now, but I can't say that it's going to happen or not."

On what he does when POISON goes on hiatus:

Bobby: "I filled my time with raising my children and a lot of personal business interests that I don't really discuss much of, but outside of POISON, I don't live a public life. I live a very private life. It's not very rock 'n' roll what I do outside [of POISON], but I make a lot of money. [Laughs]"

On whether he has the "itch" to make new music with POISON:

Bobby: "I would like to, but at this moment in time, there isn't anything in process. Me personally, would I like to? Yes, but it's a matter of everybody setting the time aside. My children are grown and raised, so it's the other people in the band that have schedule conflicts. I completely understand it, because I had to raise mine when they were younger, but I managed to raise them and record [laughs]."

Bobby: "Richie Kotzen's a very talented player. [An] unfortunate personal issue happened in the band. It's pretty much public knowledge. I like the guy, but he hurt POISON [drummer] Rikki Rockett, a dear friend of mine, so I've got to let it go for what it is. But those guys have talked in recent years, and I've seen Richie at [the] NAMM [convention] and different things, and I don't hold a grudge against him or nothing. It just is what it is. The guy ended up marrying Rikki's fiancée at the time. It's a pretty difficult situation to go through and find out [about] in the middle of a tour. But it is what it is. I have no ill will towards Richie, [other than] the fact that it was the wrong thing to do."

On whether he felt that POISON could survive the grunge movement:

Bobby: "I actually could. I had a very good manager named Howard Kaufman, who unfortunately passed last year, but he made it very aware early in my career that this is a cyclical business, and if you have enough depth of hits — which POISON does — you just have to wait out the certain cycles and it always comes back, [and] as long as you can remain with the original members and the original lineup that everything would be fine in the end. It was the truth. In 1999, we came back touring, and we've been touring strong ever since. We take a hiatus here and there whenever our schedules conflict, but that's the only reason. Business is always bigger and better every year. The one thing we definitely weren't going to do was change what it is what we are. A lot of bands tried to follow that path, and it sort of blew up in their face. It really didn't work for them. I can't think of one that it did. We just took a four-year hiatus and came back strong."

On the band's philosophy:

Bobby: "I've always had to say that if you leave a POISON show without a smile on the face, you'd better go see a fuckin' therapist. For us, it was always about making great songs about great times. Some of the songs are a little deeper, but for the most part, it's always been about having a party, having fun — henceforth the title of the tour this year, the 'Nothin' But A Good Time Tour'."

On how fans of POISON and other groups of their era knew the names and faces of each bandmember, unlike most popular rock acts today:

Bobby: "I think it's partially because we promoted ourselves that way, with that first album cover with the four faces, and just the way the band was promoted that it wasn't just one guy — that it was all four of us. We were passed on by the majors and had to go the independent label route, so all the promotions and everything in the very beginning were of our own making. We were the ones that promoted the band as such."

On the keys to POISON's success:

Bobby: "It definitely takes having the talent and having the ability to do it, but it also takes a little bit of luck. In my mind, luck means preparation meets opportunity. You have to be in the right place at the right time. We were from Harrisburg, Pennsylvania, and had we stayed in Harrisburg, we probably would have never made it. Moving out to L.A. when the bands were breaking out of L.A. was probably the key to our success. Even though the majors passed on us, we didn't give in. We believed we were rock stars before we were rock stars. We made it by sheer will and determination."

On his favorite POISON songs to play live:

Bobby: "It varies from night to night. One of my favorites is always 'Ride The Wind', but I like playing them all. I like that we play our hits, and it's really about what the fans like. It's not about what I like; it's about what the fan reaction is, and that really is what we feed off of, that fan interaction. When they're roaring and they're happy, that's when I'm happy. Having 11-12 hits makes it an easy job to do. [Laughs] It's a blessing and also a curse, because you try to fit them all in, but you can't quite get them all in there, but we do the best that we can."

BRET MICHAELS Thanks The Fans And Invite Them To See Him On The Road With His Solo Band
September 11, 2022 / 135 reads