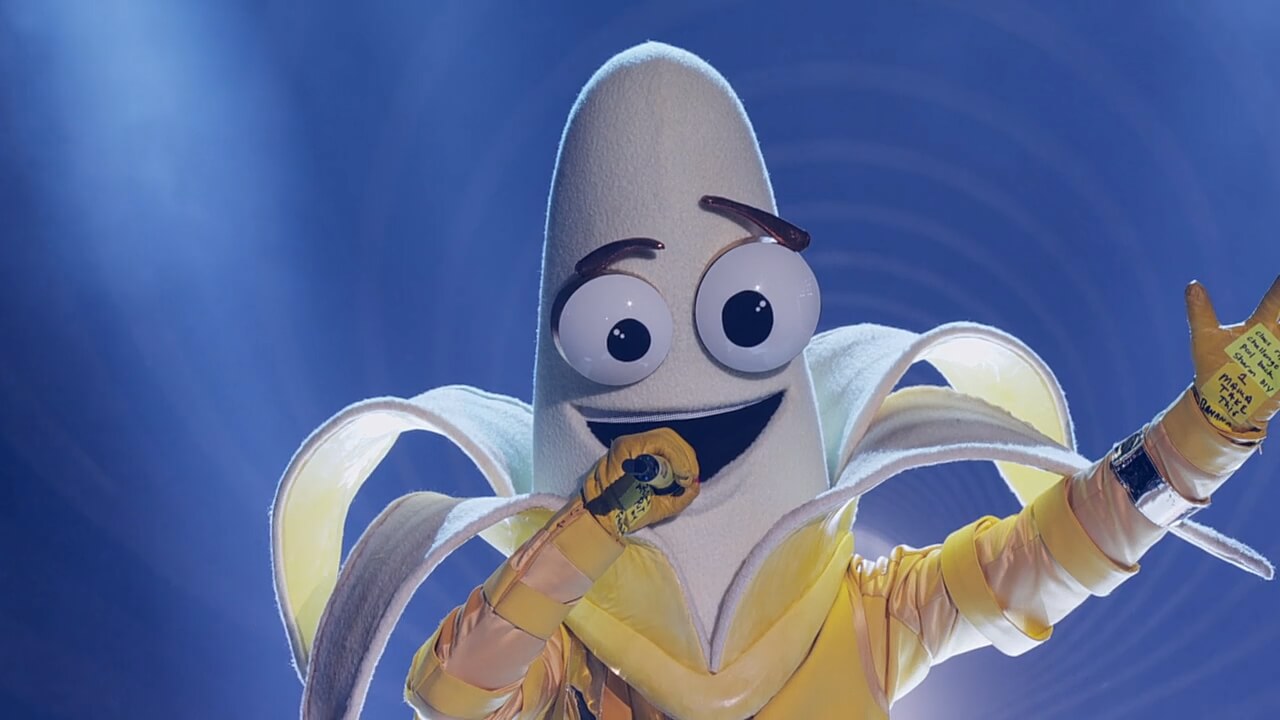 Bret Michaels spoke to Billboard before his elimination about why Masked Singer is the perfect show for our coronavirus times and whether 24-year-old Bret would approve of 57-year-old Bret singing Elvis in a banana costume on a reality show. A few excerpts follow below.

[Billboard] Did you pick the banana because it sounds like bandanna, your signature accessory?

First of all, I love doing the show. I was watching it with my family, and I loved it whether I was on it or not. I like positivity, and it's a positive show. It's fun, but it mixes crazy outfits, and I know as an artist they have to be sweating in there -- singing through a mouth hole that is also an eye hole, with no peripheral vision. ... To mix it with -- I like to consider myself an amateur detective, so I try to figure out arm size, leg size, height, all that stuff. So when I went in to do the show, the first outfit I really wanted was very Predator-like, with dreadlocks, no bandanna, but kind of able to throw the dreadlocks around, but then I thought, "Man, if I do that, I'll be gone show one. Let's not do that." So I went with something else. I said, "I'll be the bandanna banana, but without the bandanna." Being a diabetic... the thing is to stay healthy, and a banana has that natural energy. It has the fructose that keeps you rocking without jumpstarting your sugar to 1 million. Also, I was born in Harrisburg, PA, so this color works for me as a Steelers and Pirates fan.

[Billboard] So it sounds like you were already a fan before you got on the show.

One-thousand percent. The irony in my life, or the low-hanging fruit, the roses and thorns in my life, is that without ever knowing thatI would be on the April 22 show... how ironic that it would be 10 years to the night and I'm singing "Knockin' on Heaven's Door" 10 years to the night when I had my brain hemorrhage? How weird is that? They never tell you who the guest panelist is, and then I start freaking out that it might be someone I know and they said, "You may know this person." As I get to the tunnel and I walk to the grand piano to play the song... I see Sharon Osbourne and I'm like, "Son of a bi---!" We've done 1,000 shows together, we were on The Apprentice together, she used to make fun of my dance moves. She's not going to listen to anyone and she's like, "Oh, for God's sake, it's f---ing Bret!"

[Billboard] Was there a different kind of nerves you felt singing in a googly-eyed banana costume?

One-million percent! The irony of standing there 32 years into my career in a f---ing banana outfit and what's crazier is, I'm having the time of my life. I'm not hating it, I'm loving it! Then I'm thinking, "How do I throw my voice off?" I lost five real diabetic pounds of sweat, singing into a banana microphone through a hole with a little red tongue and googly eyes. Part of me is saying, "Forget about it," and another part is like, "I'm a real-life Peter Parker/Spider-Man ... there are people who were on my road crew who were rigging lights and they walked right by me like I'm a ghost. I wanted to tell people, "Hey, it's me! It's Bret!" That's what I had the toughest time with. I'm a hand-shaker, hugger kind of guy. It was the hardest thing for me not to speak.

[Billboard] What do you think 24-year-old Bret would think of 57-year-old Bret dressing in a banana costume and singing Elvis on a reality show?

I would think I was as nuts then as I am now. I always liked having fun and doing things. ... I'm a 1,000% guy. I've been offered to do stuff that would have been great but I knew I wouldn't give it 1,000%. I'm 1,000% in whether I lose or win. It was the same thing when I was 24. ... The thing no one talks about much and it's part of you as an artist, but 30 years into your career the biggest irony of the show is that part of you never wants to be discovered so you make it to the end and part of you hopes that someone figures it out because after 30 years they know your voice.

[Billboard] Your song choices were all over the place, from country to soul and Elvis. Did you purposely pick songs that would throw people off?

For sure. I was trying to pick lower-register songs. ... I love Billy Ray, and they were songs I love, but not necessarily something I'd sing onstage. To stay on the show as a vocalist, it was the thing that was good for me to do. Me and my dad, before he passed on Aug. 4, "Lean on Me" was one of our favorite songs we liked to listen to and sing.

[Billboard] Were you surprised you lasted as long as you did? Did you expect to win?

No. I go into everything 1,000%. I go into it competitively wanting to do well. I didn't go into the show as a joke. As much as the show is fun, I hoped to be there at the end. But I was grateful to last as long as I did. The first night, I went on the message boards and people were like, "99% it's Bret Michaels." And I was like, "I won't even be here two episodes, oh sh--."

[Billboard] Talk about that week you forgot the lyrics. You said your brain hemorrhage 10 years ago made you lose track of where you were.

Most people didn't catch that. I'm a people person as an artist. If you come to a Poison or Bret Michaels show, we spend the first five minutes slapping hands and giving hugs, then we start the song three minutes into it. On this show, I hadn't gotten to do that, so on "Achy Breaky Heart," I said, "Put me in the crowd!" And three things happened: One, I had a slight brain-freeze moment -- they're telling me the song is starting. One person in the crowd is going, "Bret, is that you?" I can't speak to him, so I'm trying to shake my head and he's trying to feel the peel [to see if they can figure out it's me], and then I realized I was two bars into the song and I thought, "Oh sh--." The chorus repeats twice, so here's where my artist side kicked in and I thought, "I can start singing the second half of the first chorus, which is the same as the first."

[Billboard] Who did you tell and who figured it out? Did any of your Poison bandmates guess?

My bandmates, like so many people, didn't know. But they figured it out after the first show. The only people who knew were my immediate family and my daughters, and after being asked to do it, as teenage girls, they did a good job of not telling everybody.

[Billboard] What about the other contestants? Did you figure out who they were or did they figure you out?

From my hand to God, I had no idea it was Tony Hawk. I built a 10,000-square-foot Rock Star suite at the Riviera Maya, and he was down there in it and he had no idea. I slapped Elephant on the back 1,000 times and had no clue it was Tony. I still don't know who Kitty is, and I was trying to figure it out because she broke my heart. I flirted with her the whole show, and just like a cat, she just killed me.

[Billboard] What advice would you give to other celebrities who are considering doing this show?

If you're an artist, entrepreneur, athlete, actor -- do the show. There is such a positive vibe and such a crossroads of people you're around. I'd tell everyone to do the show. It's a chance for you to actually be a real-life Avenger. You can be a real-life Spider-Man and no one knows it. I really had a blast.