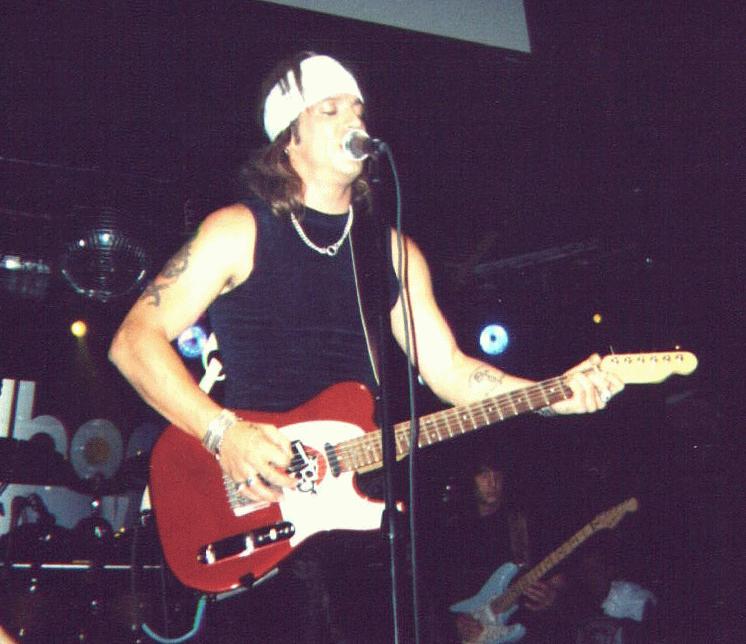 Just got back from the Bret Michaels show at Billboard Live in L.A. What a f*ckin' great night! Alas, the rumored Poison reunion did not take place, but I suppose that would have defeated the purpose of a solo show. Anyway, a little after 11:00 the Bret Michaels band takes the stage, much to the joy of the packed house. His back-up band for the evening were the members of the Atomic Punks, the DLR-era Van Halen tribute band. The band was tight and all seemed to be enjoying the show. Bret himself was a constant smile from the moment he walked on the stage till the moment he left. In between, the audience got to hear the songs from his new solo album. Based on what I heard, this is going to be one of the most amazing albums of the year. Fear not, Bret did not go grunge. There are your Poison--style songs ("Party Rock Band" and "Human Zoo"), as well as some country (about as country as "Every Rose" is), not to mention some funk. The rockers were mostly in the vein of Crack A Smile. The ballads are kick ass, with special kudos to "Stay With Me," which was just Bret and a piano player. There are even traces of rap and hip-hop. But all are done in the kick-ass rock n' roll style that we've come to know and love from Bret. What we seem to have here is an album which covers a lot of ground. The set ended with a huge cover of KISS's "Rock N' Roll All Night," punctuated by a blast of confetti at the end. After sneaking my way back stage to hanging out with a bunch of poser VIPs, I got word from someone in the fan club that Bret was going to be signing stuff upstairs. I high-tailed it up there and waited in line. When I finally got my chance to talk to the man of the evening, I told him how incredible the show was and I thanked him for all the years of inspiration. He was kind and friendly to all his fans and even went so far as to make sure that the pictures the fans were taking of him were going to come out well by posing of another round of photos. I only hope that if I ever reach that level of fame that I can be half as cool as he was. I asked when work is going to start on the new Poison album and he mentioned January. He also said that Rikki and CC were in attendance and I got to see the infamous Gerri Miller (Metal Edge) in person. Also, I had him sign a Bret Michaels lyric book that was being distributed throughout the club. All in all, a definite highlight of the summer.