MATT SMITH "I Knew POISON Gonna Make It No Matter What" 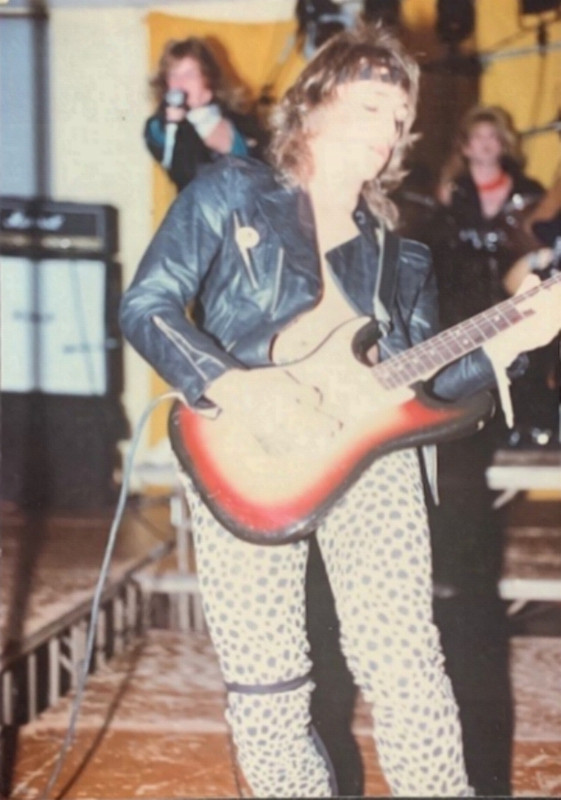 VWMusic conducted an interview with Matt Smith. A few excerpts follow below.

Before achieving mainstream success and earning a spot on the Mount Rushmore, the humble beginnings of Poison originated in Mechanicsburg, Pennsylvania, in 1983.

The earliest days featured a quartet comprised of Bret Michaels, Bobby Dall, Rikki Rockett, and guitarist Jerry Marciscano, although the latter would opt out of the band. While the band cast a wide net to find a suitable replacement, little did they know that the answer to their plight was essentially residing in their own backyard.

Merely eight miles away, in Harrisburg, Pennsylvania, a young guitarist by the name of Matt Smith was honing his chops in a band called Dirty Angel. Prepared to take the next step in his evolution as a guitarist, Smith answered an ad in the classified section of the newspaper in response to a band from Mechanicsburg looking for a guitarist willing to uproot and move to L.A.

Smith would ultimately join forces with Michaels, Dall, and Rockett to form Paris in 1983. The group extensively played the local circuit and quickly established a following.

Matt and I went to see The Joe Perry Project in Maryland. We were outside on-line for the show, and the truck with all the gear pulls up. A guy saw us and asked if we were in a band or knew about gear; we said yes, and were immediately asked to unload gear. Turns out Joe's crew was in jail in NYC for some shenanigans! After doing all that, the sound guy/road manager took us out for lunch.

The band was called Paris at the time, but we asked him if we can play our demo on the way, and he said yes. After listening to the tape, he said I know a guy in L.A. that would love you guys. Turns out it was the infamous Kim Fowley. There's no doubt they were headed to L.A., but this incident put them on the fast track. After seeing Mötley Crüe at the US Festival, that was it, off they went.

By 1984, Paris headed west in hopes of capitalizing on a buzzing music scene.

However, just as Poison began to find its footing in Los Angeles and appeared to be on the doorstep of a breakthrough, Smith left the band and returned to Pennsylvania. The guitarist was credited for writing the music for two of the tracks that made it onto the band's debut album, Look What the Cat Dragged In.

Andrew: How did you ultimately connect with Bret, Bobby, and Rikki to form Paris?

Matt: I answered an ad in the newspaper in the classifieds. I forget exactly what it said, "Looking for guitar player. Plans on going to L.A.," or something. That was right up my alley.

Andrew: You had already met Bobby Dall before you joined Paris, if I'm not mistaken. Pretty surreal that you managed to reconnect at the audition.

Matt: I only met Bob once before I joined the band. We were taking guitar lessons from the same guy. He was leaving as I was coming in. Yeah, that was unexpected. I had no idea that he was going to be there. Bobby was my best friend in the band, as it turned out.

Andrew: Poison adopted a drastic Glam image. Was this something that you were previously privy to before joining?

Matt: I knew that that's what they were gonna do. Like, my first phone calls to those guys was, you know, "We're gonna wear makeup," and stuff. So, I was okay with it. One of my favorite bands was the New York Dolls, so I was sort of all for it.

Andrew: You were an early component to Poison and had a hand in writing some early tracks. While many didn't make it on the debut album, what were some of the ones in which you contributed?

Matt: I wrote the music to "#1 Bad Boy" and "Blame It on You" on their first album [Look What the Cat Dragged In]. Other than that, that's the only two of mine that made the record. I actually forget a lot of songs; it's been a long time.

Andrew: What were some notable venues on the Strip that you got to play?

*Per Lipke, the set ended with "Train Kept A-Rollin'," and the two encores were "God Save the Queen" and "Strutter."

Andrew: From the outside looking in, what were your thoughts on what Poison ultimately became and how did it align with your vision?

Matt: I knew they were gonna make it no matter what. When I started out, my vision was more of what Guns N Roses became, to tell you the truth. That was more, like I told you before, Aerosmith was my focus. And I think Guns N Roses turned out more like that.

Andrew: What is your recollection of what the scene evolved and subsequently devolved into? You alluded to preferring a heavier sound; what was it about the Glam scene that turned you off?

Matt: I guess I saw it coming. I didn't think it'd be that fast. I didn't mind the glam so much. I mean, you can have a heavier sound and still be glam. Like the sound that the [New York] Dolls had. That was pretty heavy. But, [Glam] is sort of a pain in the ass doing shows and stuff. Putting make-up on and making sure your hair's right. It can be a pain in the ass after a while.

Andrew: What factored into your decision to leave the band and return home to Pennsylvania?

Matt: My girlfriend at the time came out to visit me and she got pregnant. I waited nine months to make the decision. I couldn't live with myself if my son was back here in Harrisburg and I was still living the Rock N' Roll life.

Andrew: Previous to your departure, the band valued your input and included you as part of the audition process. Who were some of the hopefuls?

Matt: They definitely asked me what I thought. I saw Slash and a couple of other guys. I think I remember C.C. [DeVille]

Andrew: Who was your preference to be your replacement?

Matt: Oh, Slash. I liked the way he played. I thought he was cool.

Andrew: What was your initial impression of C.C.?

Andrew: Do you feel that his traditional playing style influenced the direction of the band?

Andrew: How would you describe C.C.'s playing style?

Matt: See, that's hard for me to say. From the very little time that I did talk to him, I know that he was very into Cheap Trick. I can hear some Cheap Trick on him on [Poison's] first album. Not necessarily the sound, but some of the ways he wrote songs, I think.

Andrew: Given the monumental heights that the band reached, do you have any regrets that you didn't stick it out a bit longer?

Andrew: Some know of know your history with Poison, but there isn't much out there on your post-Poison life. Aside from your time with the Syn D'Cats, tell us more about your journey.

Matt: I ended up being a full-time dad. I coached football, baseball, and basketball, and watched my kids grow up.