MATT SMITH "POISON Have Completed A New Batch Of Songs" 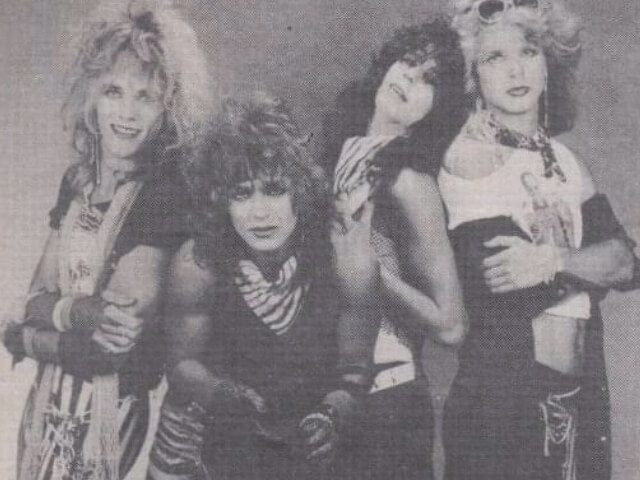 This is an early article of Poison with Matt Smith from an unknown magazine.
Transcript by poisonfanclub.net

POISON came together during the summer of 1983 in their hometown of Harrisburg. The band had previously gone under the monicker of PARIS. Drummer Rikki Rockett and lead singer Bret Michaels played in a band known as SPECTRES for 2 1/2 years. Then they recruited bassist Bobby Dall and took guitarist KoKo Smith from rival band - DIRTY ANGELS. POISON then dubbed as "Heavy Metal's Lipstick Killers" played the East Coast for six months. After this they moved up to LA kissing everything barring their equipment goodbye.

POISON arrived in Hollywood in March '84.

POISON were then discovered by LA legend Kim Fowley who said the band "make MOTLEY CRUE look like CANNED HEAT". He began working with them for an album project and then the two companies parted. That was really silly of Fowley, since methinks POISON are due onto bigger and better things. The three-track demo which I have features: "Steal Away", "Straight Ahead" and "Rock Like A Rocker" and is produced by Jim (RATT) Faraci engineer for RATT's "0ut Of The Cellar" outing. They are all numbers which can certainly give RATT and CRUE a run for their money. Especially "Rock Like A Rocker" where vocalist Bret Michaels comes across as a stronger Vince Neal.

I recently got an update from KoKo Smith on the band. The band have completed a new batch of songs. This time the songs have been recorded for Atlantic Records, who also paid for the sessions. So a deal with Atlantic Records looks imminent? Well, Koko, certainly hopes so. KoKo also wants to get over to Britain A.S.A.P. and personally I can't wait to see them because they are gonna kill.