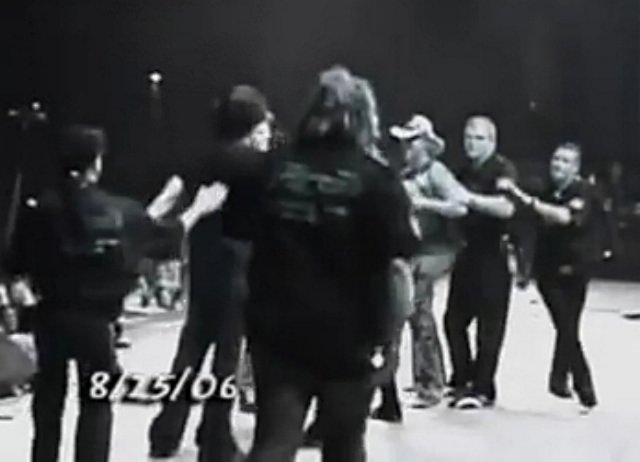 According to a posting on the Metal Sludge web site, "It's hard to make it all out [in the video clip], but you'll see Bret turn and throw his mic towards Bobby and/or the drum and bass area of the stage. Then Bret goes back to center stage as Bobby winds up 'Every Rose' video-style and wind mills his neon green bass at Bret's legs."

Account#1: "Don't know what started it, but right before the encore Bret [Michaels, vocals] and Bobby [Dall, bass] appeared to be in a heated discussion and next thing ya know Bobby slings his bass at Bret. Rikki [Rockett, drums] and the roadies had to come in and separate them. Bret then went on to apologize and say how we may have just witnessed the last POISON concert ever. Bobby later came out and finished the song... guess to give the fans what they paid for. Wish I knew what was said."

Account#2: "The next-to-last song has always been 'Nothing But a Good Time', at least for the last six years that I have seen them. Then they seem to always close with 'Talk Dirty To Me'.

"Well, 'Nothing But a Good Time' was played, the confetti dropped as it has every year, the band comes out and waves and it goes dark. A couple of miniutes pass by and Bobby Dall (the bassist) comes running on stage pics up the mic and starts screaming, 'Do you want some more? I can't hear you!' I mean, screaming the shit. I was weird and unusual....just the whole atmosphere of it seemed strange, the way he was acting. Then the rest of the band comes walking out looking puzzled and Bret tried to get the microphone from Bobby. He shoved Bret and looked seriously pissed off. I mean, he looked like he was ready to throw down. Bret took the boxers stance (you know dukes up and bouncing) and I was just kinda trying to play it off with a smile but Bobby wasn't smiling at all. Then four or five roadies come on stage and pull them off the stage.

"A couple of minutes later Bret comes out and apologizes to the fans. He said 'That shit has been building up for 20 years.' He then explained, 'We are like brothers, and sometimes brothers want to knock the fuck out of each other.' He apologized for not finishing the show with 'Talk Dirty To Me' and then said, 'Atlanta, you may very well have seen the last concert by POISON in its current formation.' (pretty much verbatim)

"Rikki and C.C. had '[What the fuck]' looks on their faces. Then Bobby comes out and says, 'Fuck it let's play one more.' Rikki walked to his drum kit, C.C. got handed his guitar and they played 'Talk Dirty'. During the song, Bobby was running around all over the stage, a lot more than is normal for him. C.C. and Rikki kept exchanging looks with each other like they were disgusted and Bret was Bret; he just sang his ass off and didn't pay attention to Bobby.

"At the end of the show, Bobby took his bass off, handed it to the roadie and walked off the other side of the stage while Bret, Rikki, and C.C. all said goodnight to the fans and thanked them for coming out.

"It was awkward, and not staged at all in my opinion.

"After the house lights were on, Bret apologized to some of the fans on the front row....without a mic, he just said, 'Guys, I'm sorry that happened here.' Seemed very genuine to me.

"As we were leaving, we have to pass by the area to where the people line up for meet/greet passes....given out by radio stations and fan clubs. Well, one of the guards walked up and told them there would be no meet-and-greet tonight."

Despite the onstage altercation, POISON's show in Memphis, Tennessee the following night (Saturday, August 26) went on without incident.