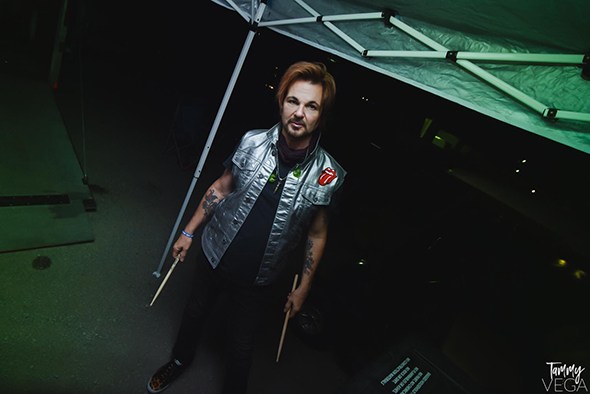 Jason Price of Icon Vs. Icon recently conducted an interview with Rikki Rockett. A couple of excerpts from the chat follow below.

Icon Vs. Icon: I'm sure POISON experienced trials and tribulations through the years. What are some lessons learned early on that impacted your career?

Rikki: "I think being honest with our fans was one of the most important things, literally. This kind of answers the last question a little bit too. Being an artist really is about coming from a personal place and in everything you do. It's not about trying to second-guess what the market wants and all that kind of stuff. That stuff is very fragile, and it doesn't work in the long run. I think that's why a lot of artists don't last now. Someone will come out and they are the shit for a while and you can't get away from it. Then, all of a sudden, a few years later, you are, like, 'What happened to them?' I think a lot of that comes from people getting in their heads and saying, 'Oh, I need you to do this for social media… ' or whatever. It's stuff that they didn't want to do. You can see that it's frail; you can see right through it. You go, 'That person isn't doing what they set out to do in the first place.' All this is unspoken, of course, and, eventually you just see it for what it is. We just always done what we've done. We didn't care that there was grunge or hip-hop. All that is fantastic, it's great, but this is what we do."

Icon Vs. Icon: I know you get asked all the time about a new POISON record. What I haven't seen much of is people asking what you envision a new album to be if and when the time comes. Have you given it much thought?

Rikki: "No. Well, I have as an individual, but as a band, we really haven't. I think one thing that we can all agree on is that it would be a fun, kick-ass rock 'n' roll record, because that is, at the end of the day, what we do. We're not suddenly going to do the PINK FLOYD thing and write 'The Wall'. Maybe we should! Maybe we should go out with an opus at the end! I mean, we have to do a rock opera before we bow out, right?"

Icon Vs. Icon: Very true! It does seem like everything ends up on Broadway these days!

Rikki: "Oh yeah! I think it would be amazing! [Laughs] I don't know the next release would be an album. It might just be a few songs here and there. How do you package and album these days? It's not the same as it used to be, and you don't do that anymore. You can for the sake of nostalgia, but, at the end of the day, I don't know if it really sells that way. Music these days is delivered electronically."

Icon Vs. Icon: That's a good point. It's interesting because there are bands who were peers of POISON who still put out amazing music, but it doesn't necessarily get the attention it deserves.

Rikki: "I agree. Look, not long ago they did a thing with younger adults and asked the question, 'Would you rather give up Snapchat or iTunes?' Sixty-five percent said they'd rather give up their iTunes. So, what's that tell you about music in general? That's scary and people have trouble wrapping their head around that, but music isn't as important in this culture as it once was in its own right. Meaning that it's an ancillary product to video games, a TV show or something else. To guys like us, we can't imagine that, because music is everything to us. That is our life and who we are at the end of the day but a lot of people who might be 15 years old don't see it that way. It's not everybody — don't get me wrong. There is some writing on the wall with some of these new acts coming out — they're rock bands! That's awesome and hopefully that trend will continue."