RIKKI ROCKETT On "Glitter For Your Soul" Solo Album 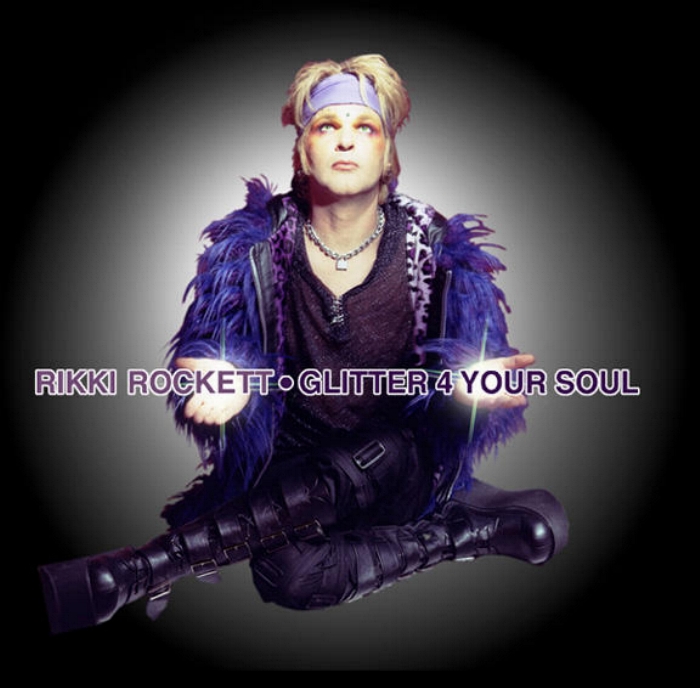 MusicMayhem recently conducted a phone interview with Rikki Rockett. A few excerpts below.

J -When did you decide to do a solo album?
R-This was a couple of years ago, to tell ya the truth, the short history on this was basically when Blues was in the band..94' I guess.. we were cutting a demo.. for the one song that wound up on Crack a Smile.. at the end of the night.. just Blues and I were there.. and I think "Young Americans" cd was there.. and we were like ..what the hell.. lets pick a song and do it just for the hell of it..we thought "Fame" would be cool. and we thought maybe the guys would dig it.. so we recorded it ..pretty quickly ..and never did anything with it, several years later, I'm going through my stuff and I found a DAT of it.. and I'm like.. this is really cool, so I called up Blues.. and I told him I'm thinking about doing a bunch of these kind of songs.. and he's like.. look I haven't even heard it.. I'm like why don't you just come over.. and I managed to find a reel to reel.. cause I have all my reel to reels stored.. I transferred it to Pro-Tools..and we mixed it ..then I said lets do a record.. I need you, and I need one other person so I got Chuck Garric who I made friends w/in the 99' tour.. the bass player for L.A. Guns, he was like.. I love this stuff.. so we put a little band together.. just to rehearse the songs, and put the basic tracks together.. so then they went away.. and I was left to put the rest of it together.. basically.. Cliff Calabro the co producer.. and I..

J-How did you pick the singers.. did you have an idea of who you wanted on the songs? because your match up of singers to the songs is perfect.. did you picture wanting John Corabi for the Alice Cooper song, etc..?
R-Basically it was whoever I could get to come all the way out here.. hahahaha....
No.. some of the things didn't come through.. ya I thought John Corabi...... I couldn't think of a better person that sounds like Alice.. and a really good Alice.. he's got a great voice that guy!

J- Yes he does!..
R- And ya know.. Jizzy Pearl is the only guy who can sound like Frank Dimino from Angel.. except Frank Dimino.. ya know.. he was perfect for it.. and he wasn't that familiar w/the song, but he liked the vocal style, and once he listened to it.. he was like.. ya I can do this.. and I can do it justice..
as far as some of the other ones. it was like who does what.. I talked to Gina Shock.. and she sings "Bleeds" in her side band.. and she goes.. oh Rikki I love the New York Dolls.. and I said.. well this is a good song I picked you. "Trash" ..and she's like I know that song.. so she was just all over it.. she said she can be real punkie.. so she did that one.. I mean I'm not gonna go track by track here.. but the one I wound up singing "Life's a Gas" ..initially Roland Boland who I talked to several times. Marc Bolen of T-Rex's son.. really wanted to do it..so I told him he could pick anyone of his fathers songs.. just let me know which one he's comfortable with...so he thought that one would be cool...cause he has a band.. and its nothing like this style, its more like Lenny Kravitz.. so I said lets meet and do it.. a few days before hand, his band broke up and he freaked out. wouldn't talk to anybody.. and I was like ya know what.. I have to cut this track... Cliff goes..you sing it.. I'm like are you kidding.. I don't sing!

J-I'm glad you sang it.. it sounds great.., that was the next question..why don't you sing more on it..?
R- Well it was one of those things.. and I decided to do it..my idea was not to sing on any of the tracks..cause I'm not a singer... I'm a drummer.. I've been singing background forever..but background is a different dynamic. I try not to have an vibrato. and I sing very straight. for me to sing lead was just a completely different experience.. cause I have to have character in my voice..and I don't have that much character when I sing.. I'm very bland..so I had to really work at it..its pretty cool though. I was like whoo.. this is weird..still I don't like how it sounds, but everyone is like nooo..its fine..its not amazing, but its really good....

J-How about the song selection.? is this some of your favorites?
R-I decided to do "Elected". cause this was recorded right around the time of Bush coming into office..thats how long I've been working on this..hahaha..so that's why. I wanted to to "Billion Dollar Babies" ..cause I love that beginning drum break.. I'm sure everyone as a teenager sat down at a drum kit..and played it..(imitates drum beat) you had to learn that..it was a givin...ya know ..or the beginning of "American Band" ..Grand Funk. .both those songs I almost did.. actually. Poison used to do "American Band"... now I think Krokus did it.

J- Ya.."Action" is my favorite..
How did the rest of the guys in Poison feel about the solo album?
R- They loved it.. Bret sang on "Tear it Down".. he did a really good job on that.. and they supported it.. ya know.. I kept it away from anything that was going on in Poison.. if there was a tour.. I didn't want to release it.. I just didn't think it was fair to anybody....actually this would have been put out last year.. but we put out a record.. and toured. this has been done for a while..

J- I'm sure your not gonna tell me the bands you didn't get along with..
R- Well everybody know we didn't get along with Warrant.. to this day there is still weird stuff with them.. every time I turn around... Jani Lane is saying something weird about us.. so I don't really respond to it anymore.. cause that's about all the press he can get.. ya know what I mean....
I mean there is ex-guitar players still saying stuff.. but ya know what.. Poison gets bagged on by a lot of bands, we're an easy target.. for other bands.. but then I have to look at were these bands are.. and I get it.. its not like Mick Jagger is saying it.. or Joe Perry is saying it.. its some guy who is bitter cause his songs didn't hold up.. I mean where is Yngwie Malemsteen... hahaha.. Ya know.. who could play circles around C.C. supposedly.. ya he's a fabulous technical player.. with no soul what so ever.. and nothing he ever produced was ever worth anything.. ya know.. you can be schooled to do that.. Quiet Riot was horrible to us, when we were an opening band, not Frankie he's a wonderful person.. but there were a lot of bands that were pretty mean to us.. super restrictions.. super jealousy.. ya know. especially when singers would see the reaction from the audience to Bret.. but we were always pretty cool to our opening acts.. we've been accused of not being cool.. but they know deep down, that we always were.. even Ratt had some weird stuff about us.. I even told Blotzer this.. I was like ya know.. you guys were dicks... except for Robbin.. he was always nice, they said we could use pyro.. we bring pyro out, and 2 days later they would get jealous.. and send the pyro guy home.. and we'd have to pay him for a week... and he would say... "well our manager said..." and im like come on Blotz... ya know.. its me...its ok.. its years later.

J- So now onto your toilet seat painting....Where did you get the idea to do that?
R- Well I wanted to learn how to pinstripe and I started to learn, and started to learn how to airbrush ..I've always been graphically oriented.. and the easiest thing to paint on is a flat surface.. when your pin striping, cause generally you lay your hand down on the surface, to pull the line.. and I was like.. maybe I should spruce up these hotel rooms a little bit.. and I started taking pictures of it.. and Sludge wanted me to do a diary.. and I didn't want to do another one.. so.. I remember this Picasso quote that said painting is like keeping a diary.. so I said.. hmm.. that would be a neat idea, ill paint toilet seats and take pictures, and put them on my website... to that's my diary... see me progress...from the beginning of the tour, till the end, lets see if I get any better.. which is really putting myself out there if you think about it. I get horrible criticism.. I got a couple pin strippers.. go dude.. when your in Wisconsin, why don't we sit down for an hour.. let me help you... cause some of it is really good.. but your execution is not there yet...hahaha..

J- And you left these toilet seats behind right?
R- Oh ya.. I just left them there..

J- That's so funny...hahaha
R- So I just keep doing more and more.. and Spin magazine picked up on it.. and everyone was like you should do a show.. so when I got home.. I crammed I met a guy in Surgis S.D....who's from Vegas.. and has been doing it for 40 years.. and said I'm going to get you there.. but your going to have to practice your ass off.. so we met back up after the tour. and he was really super impressed with how far I had come.. cause I really got into it.. and I just decided to start doing stuff.. and I had an art show.. with all of it.. I crammed.. that's all I did, cause on tour.. you cant play.. its the weirdest thing.. you get to play that hour and half.. or 2 hours.. but that's it, you don't have access to your gear, a guitar player can take his guitar in his room.. but I cant...ya know.. I don't have anything to play... so I was like damn it.. I'm gonna get good at this..
now its great to see it all come together.. I'm doing these big panels.. that are all elaborate.. and I'm thinking about having another show....
J- Now at the show.. you sold them right? Is there somewhere you can buy these?
R- Yes.. sold them there.. and you can get them on my website.. www.rikkirockett.com Ya they are there.. well actually they are at the Von Dutch store right now.. in Los Angeles... bunch of originals.. most of them are still there, I'm probably gonna go get them in the next week or two..