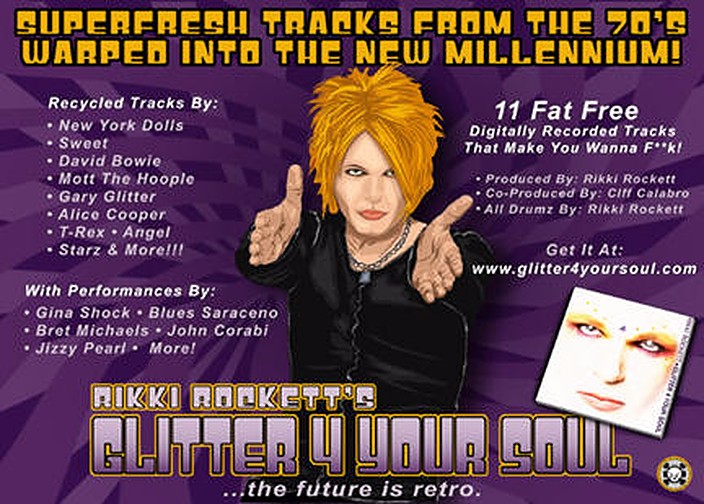 Rikki Rockett is set to release his first solo record Tuesday, Jan. 7. The album, entitled "Glitter 4 Your Soul", contains 11 tracks of remakes of 1970's "glitter" songs by such artists as DAVID BOWIE ("Fame"), T. REX ("Rock On"), THE NEW YORK DOLLS ("Trash'), THE ROLLING STONES ("Star, Star"), ALICE COOPER ("Elected") and others. Rockett plays drums on all songs, with fellow POISON bandmates Bret Michaels and C.C. DeVille, former bandmate Blues Saraceno, Gina Shock of THE GO-GO'S, Chuck Garric of DIO, Lucy Levinsohn and Marc Minarik of LILY'S SIREN, Eleanor Academia (THE BLACK SWAN) and others recording vocals and playing instruments on the record. Rockett himself sings lead vocals on his version of "Life's A Gas" originally recorded by T. REX.

"This record is about an era of music that liberated rock to a new level of social impact and still to this day inflicts its influence on just about everyone who is involved in the ranks of rock and roll knowingly or unknowingly," Rockett remarks. "This is a salute, not a re-invention. My commitment was to record a broad range of Glitter music with today's tools, not re-invent it. It's simply my attempt to keep the music alive." The album can only be purchased off the web site, www.glitter4yoursoul.com.