The Masked Singer on FOX: Look What Banana Dragged In! 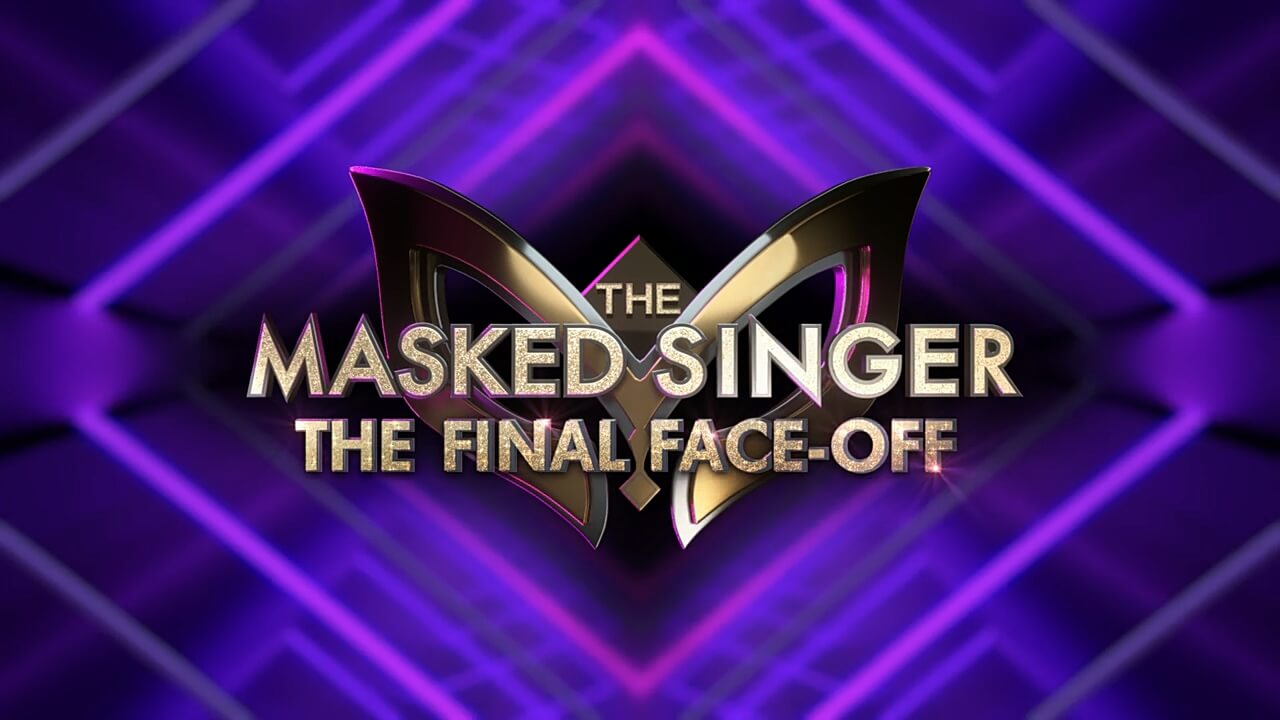 Following last week's sing-along special, which featured no elimination, "The Masked Singer" got back to its regular unmasking schedule tonight, as four of the seven remaining Season 3 contestants competed and one got the boot and had their identity revealed. 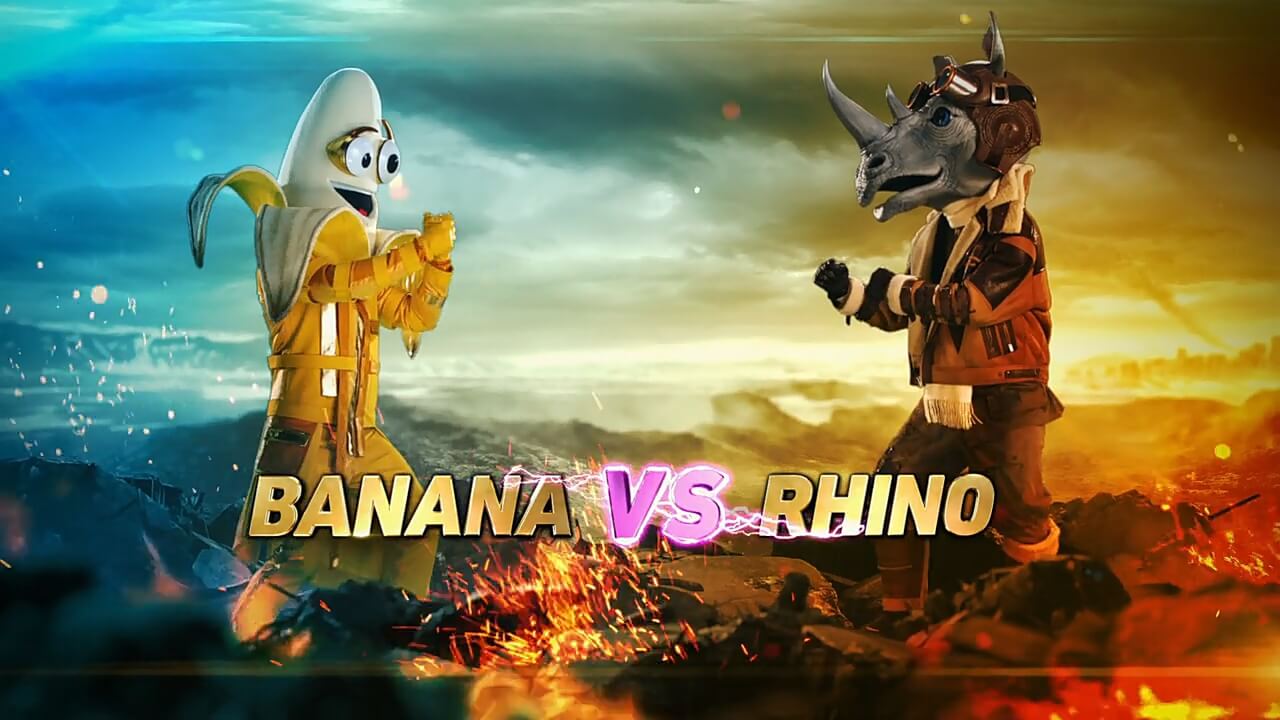 During the hour, Kitty faced off against Frog and Rhino duked it out with Banana to see who would emerge victorious. 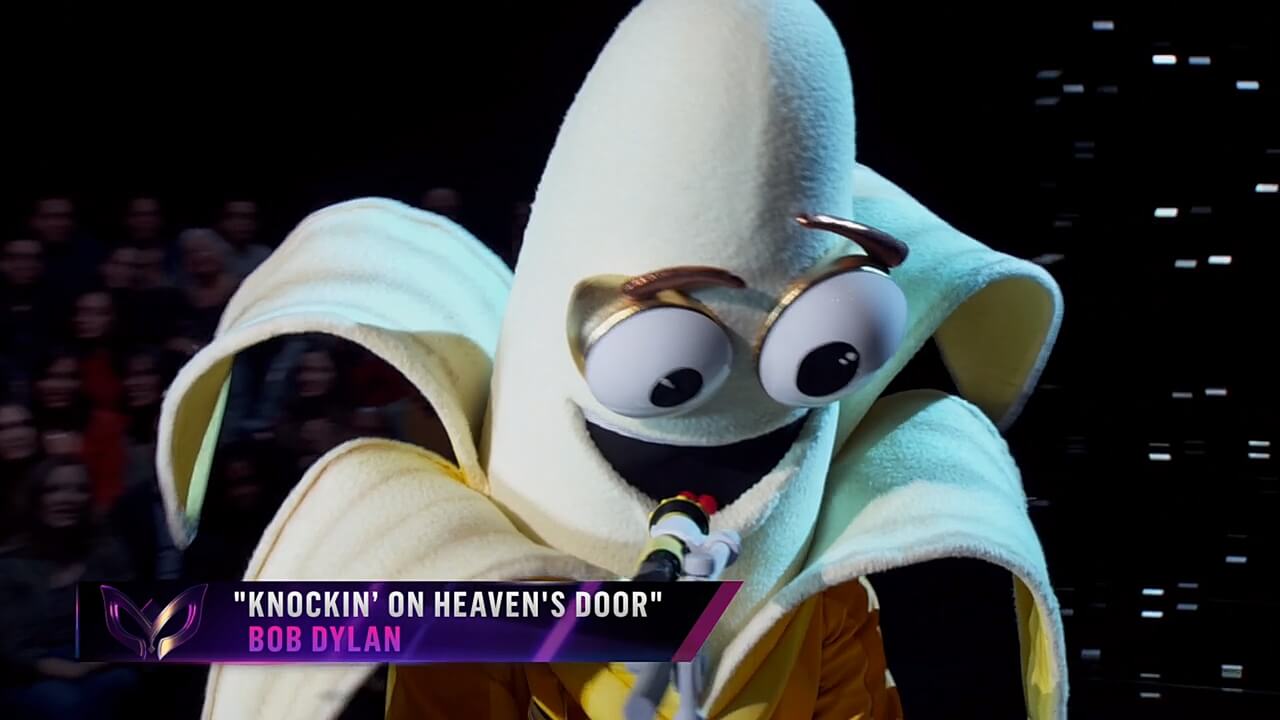 Banana sat at the piano to sing "Knockin' on Heaven's Door" by Bob Dylan, and his growly performance had the crowd standing and swaying. 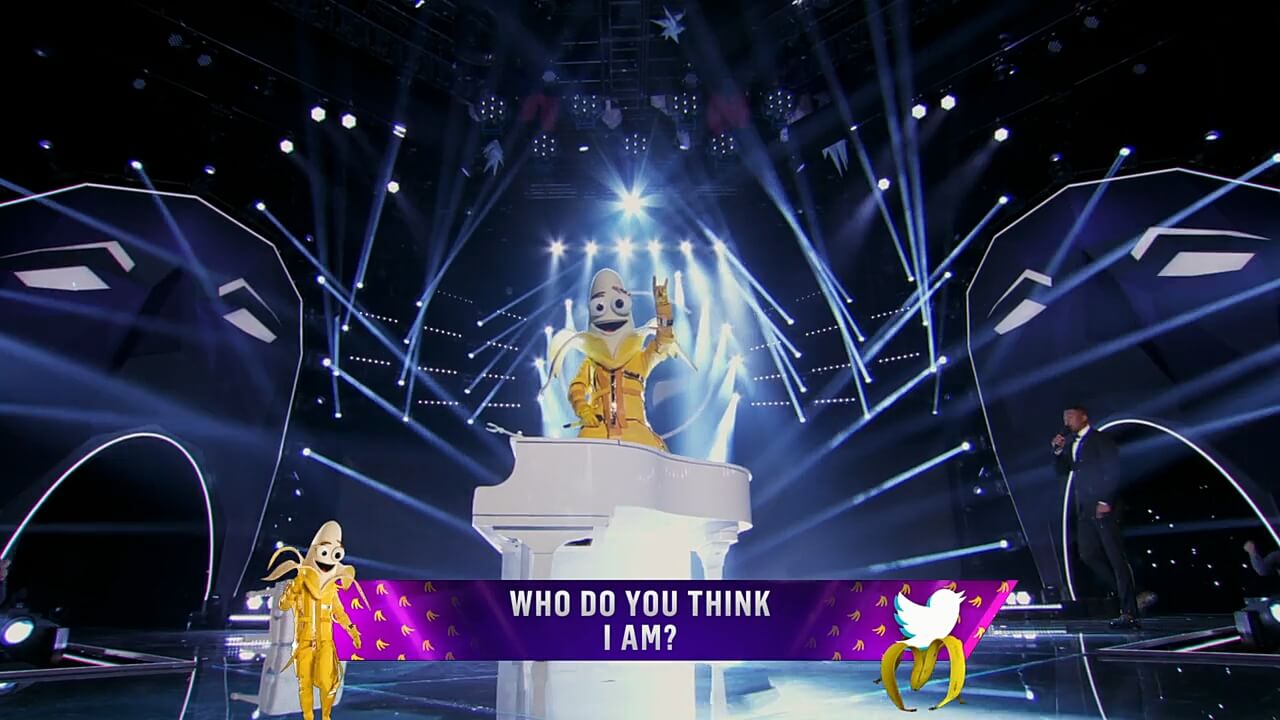 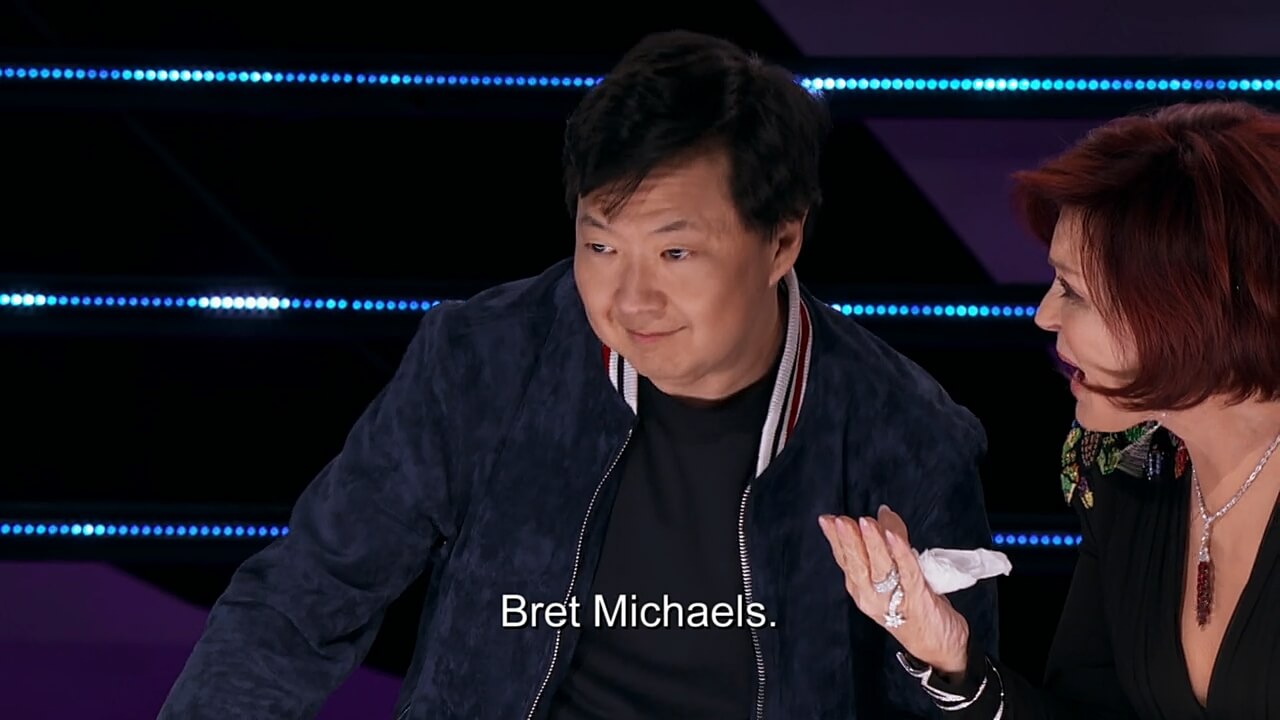 His bag was packed with a cat, a can of bug spray, a Nashville sheriff's badge and two labels, one that said "backstage crew" and one with the image of a tongue. 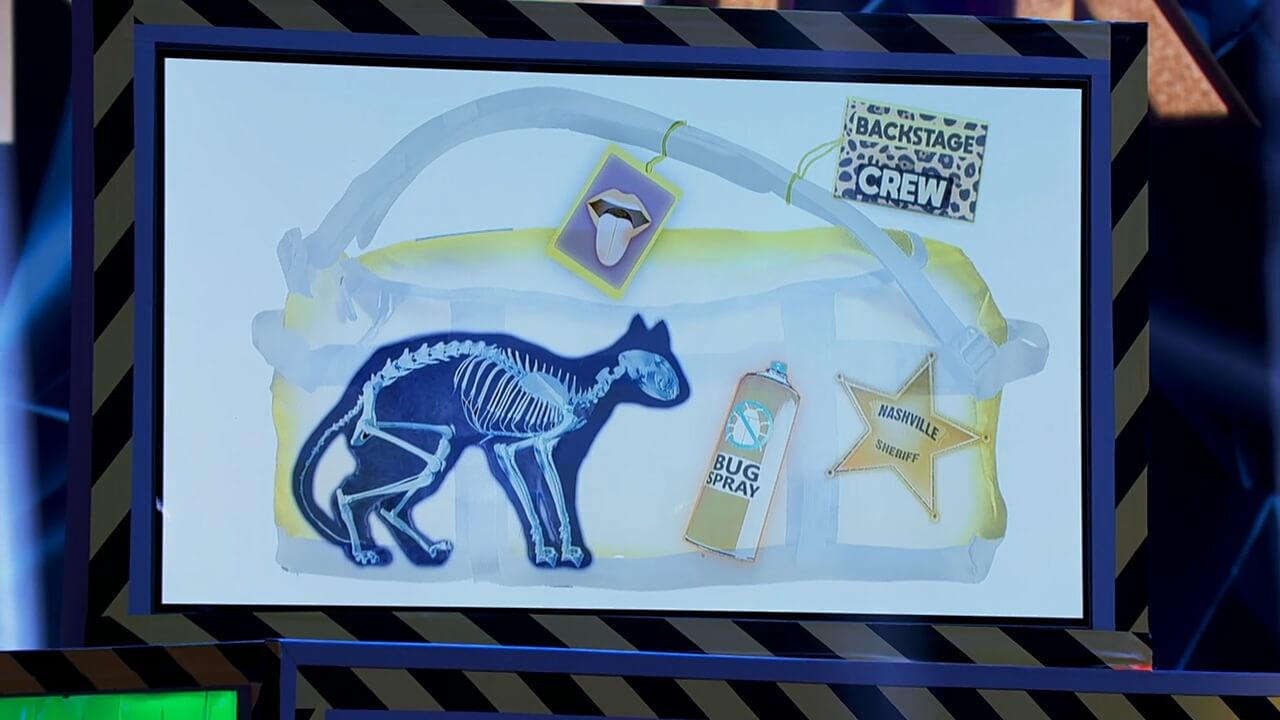 McCarthy surmised that the cat in the bag and the fake x-ray machine constituted a "cat scan," meaning it's Bret Michaels under there. (The Poison singer suffered a head wound at the 2009 Tony Awards.) Jeong apparently didn't listen to the voice of the performer and guessed Keith Urban, seemingly just on the Nashville clue. Scherzinger suggested Kid Rock because of the many cowboy hats in his clues. 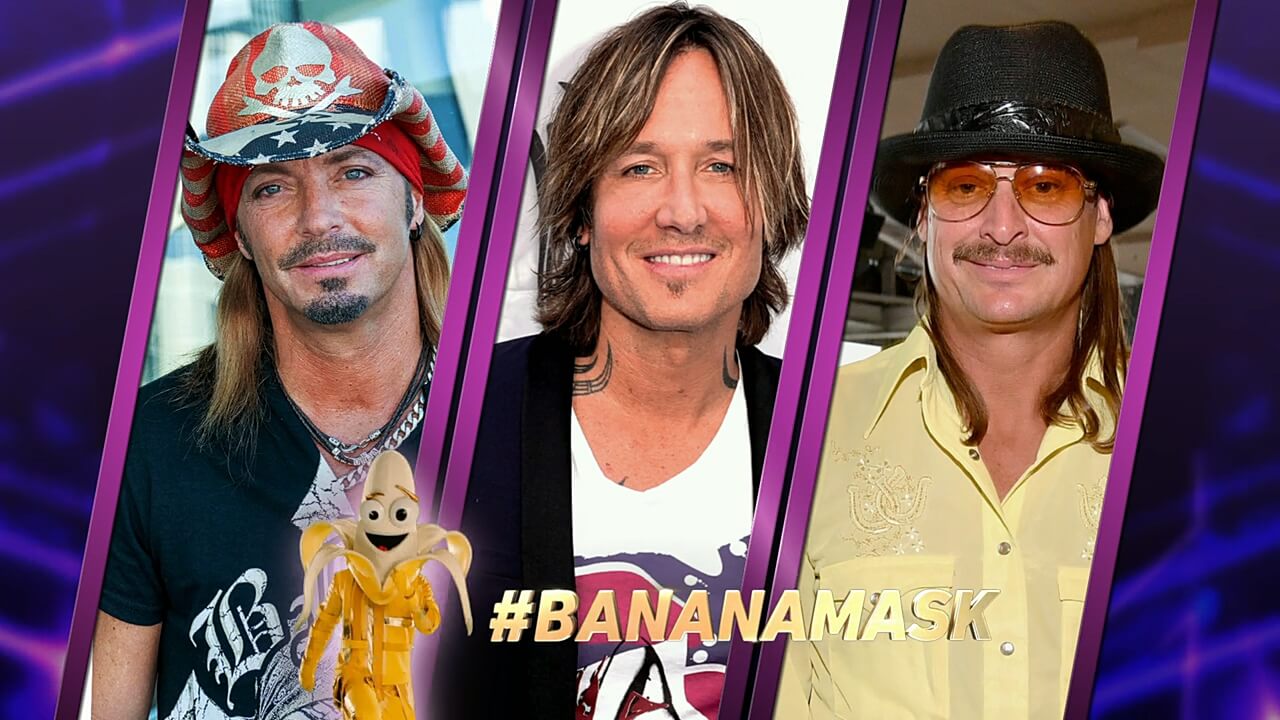 Kitty and Banana each to their respective competitors, so they had to go head to head in a "smackdown" round to see who would make it to the Top 6 next week. Kitty sang Sia's "Unstoppable." Then, Banana gave it all he had with the Commodores' "Brick House." 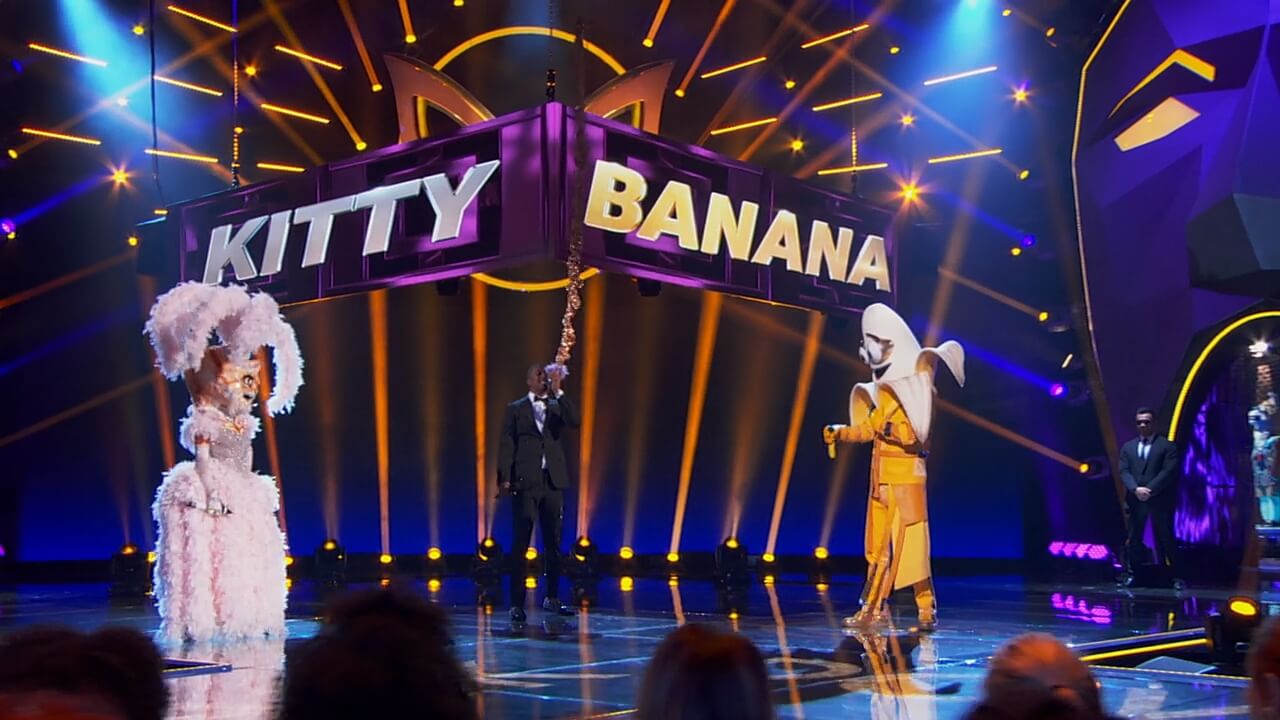 After Kitty and Banana's singoff, it was time for "Masked Singer" panelists Jenny McCarthy, Nicole Scherzinger, Ken Jeong and Robin Thicke, along with guest judge Sharon Osbourne and the studio audience, to choose a contestant for elimination. They picked Kitty to keep performing next time. 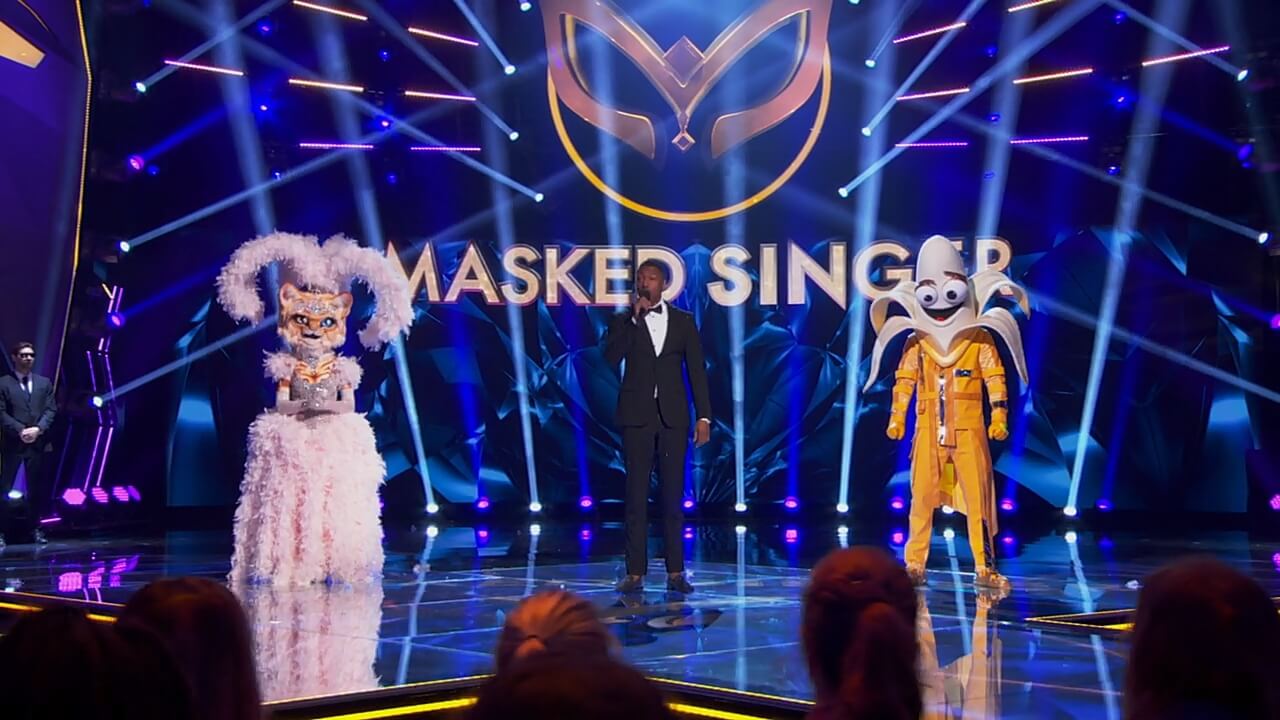 Final guesses: McCarthy stuck with Michaels, and Osbourne, Scherzinger and Thicke jump on her bandwagon. Jeong went with Brad Paisley, and Cannon said what we were all thinking: "Ken's probably wrong." 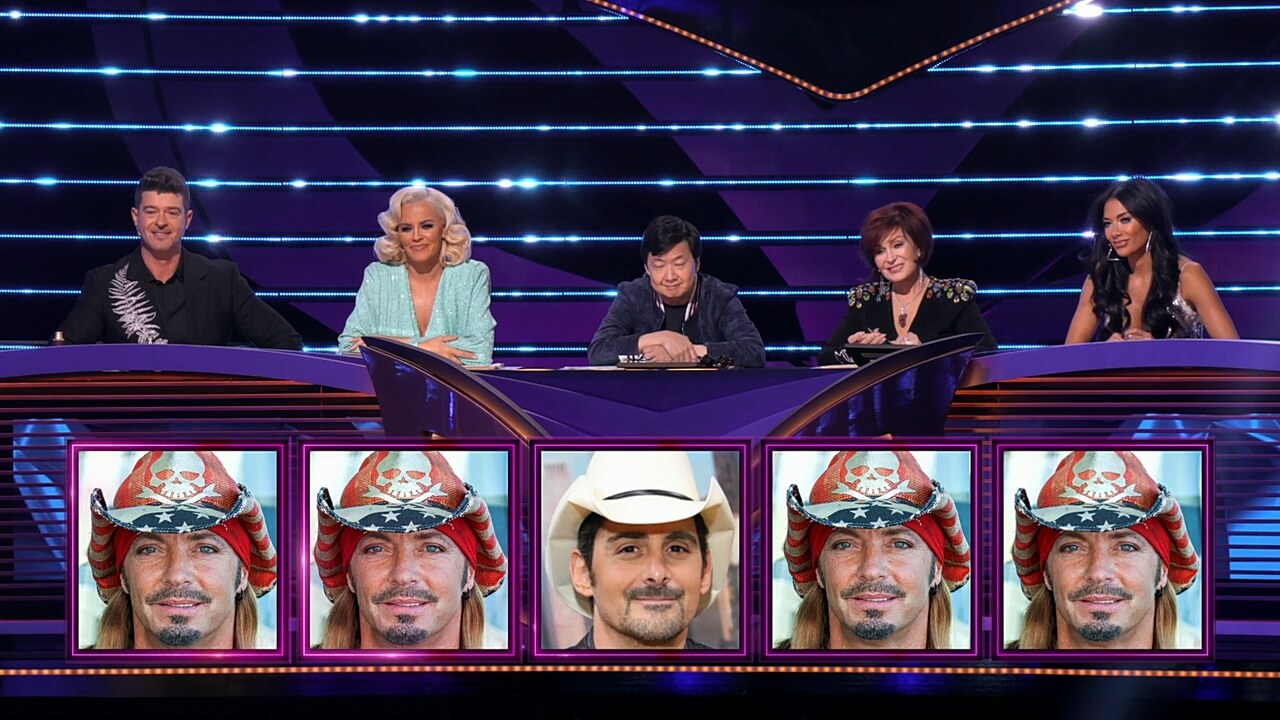 Then, Banana was unmasked to reveal. 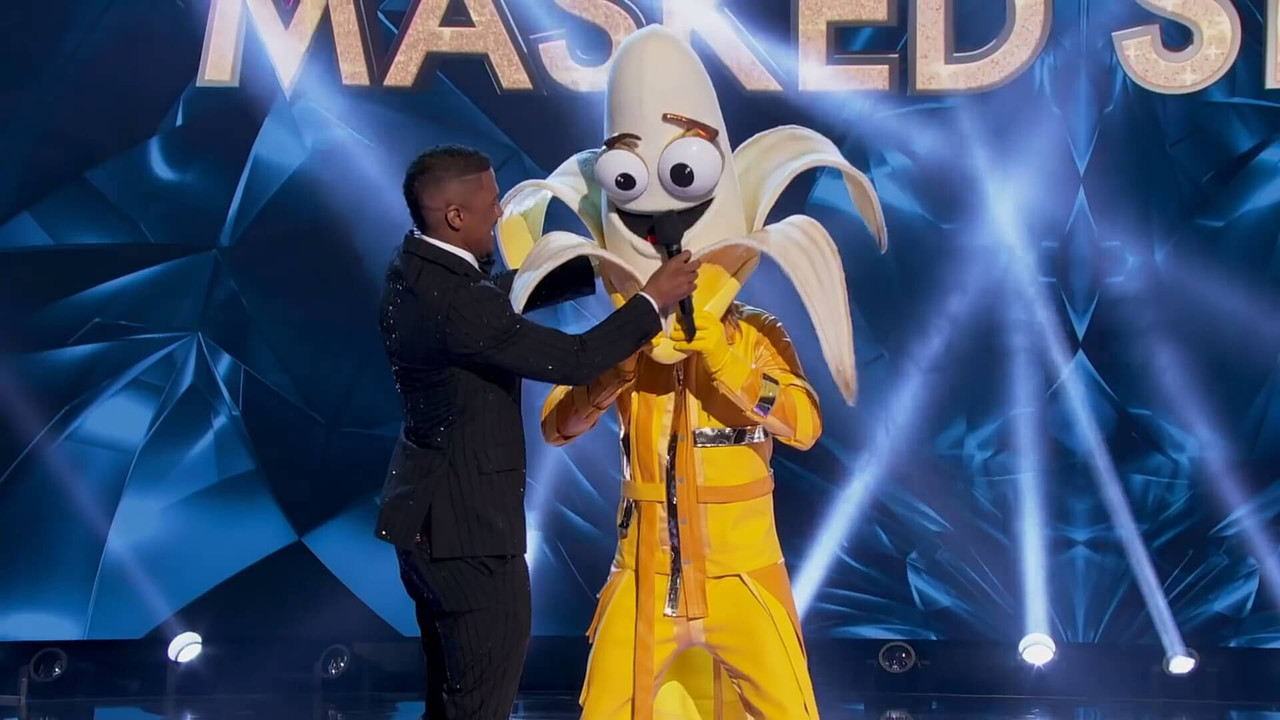 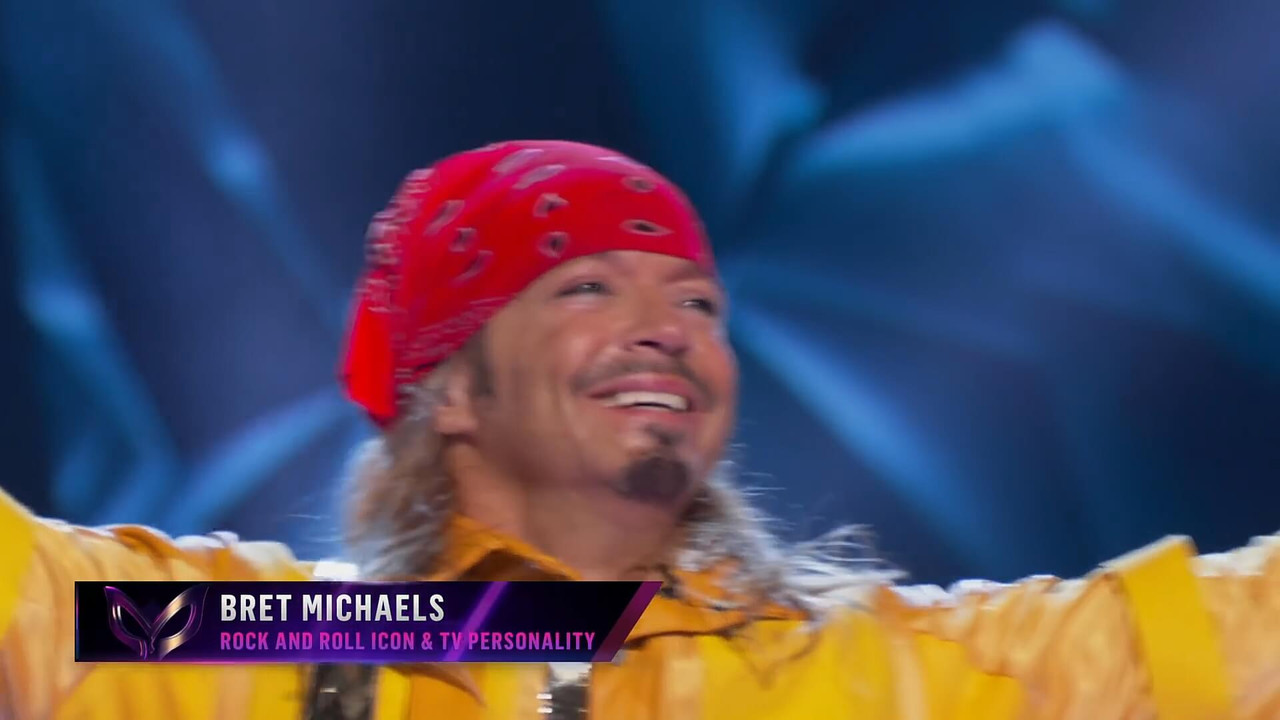 "I know it's Bret Michaels," Sharon laughed as host Nick Cannon asked the panelists' final guesses. "I know his voice so well, and when he was waiting to do the smackdown he did [a booty-slap dance move] and he always does that!" 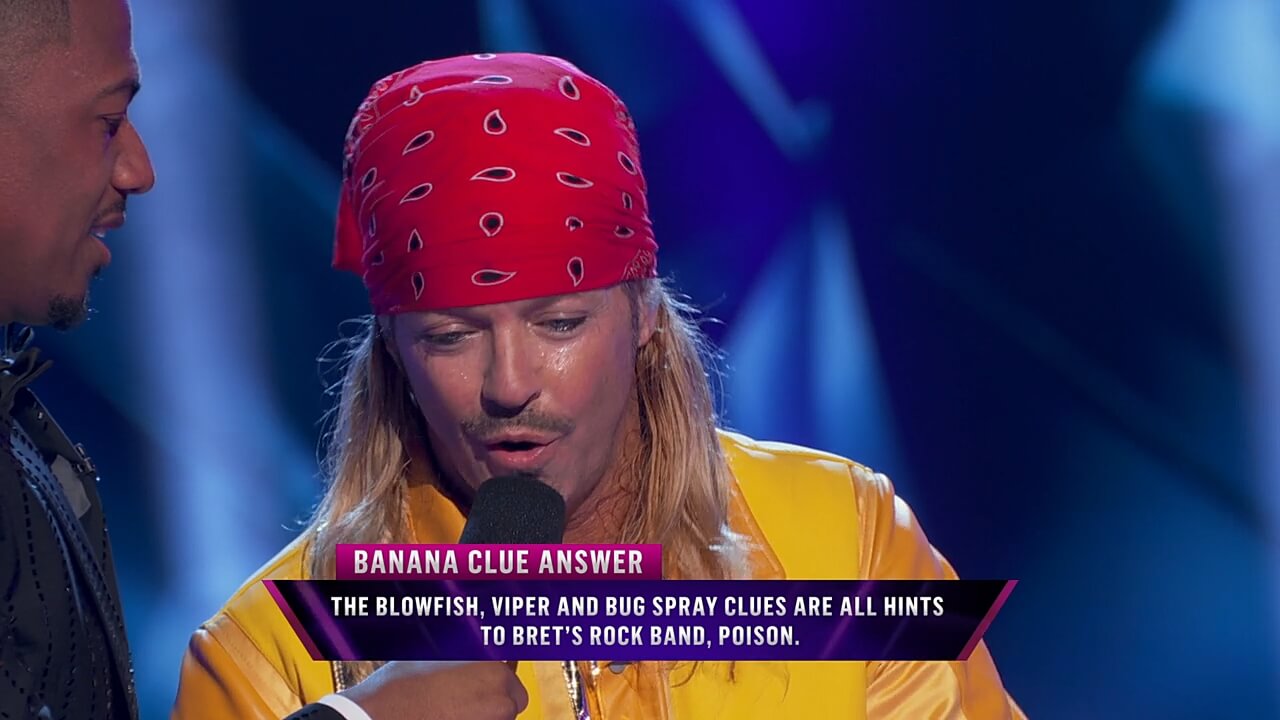 Persuaded by Sharon, Robin Thicke also reckoned he'd be Michaels, pointing out that the singer's "bug spray" clue was likely a reference to Poison, his band name. 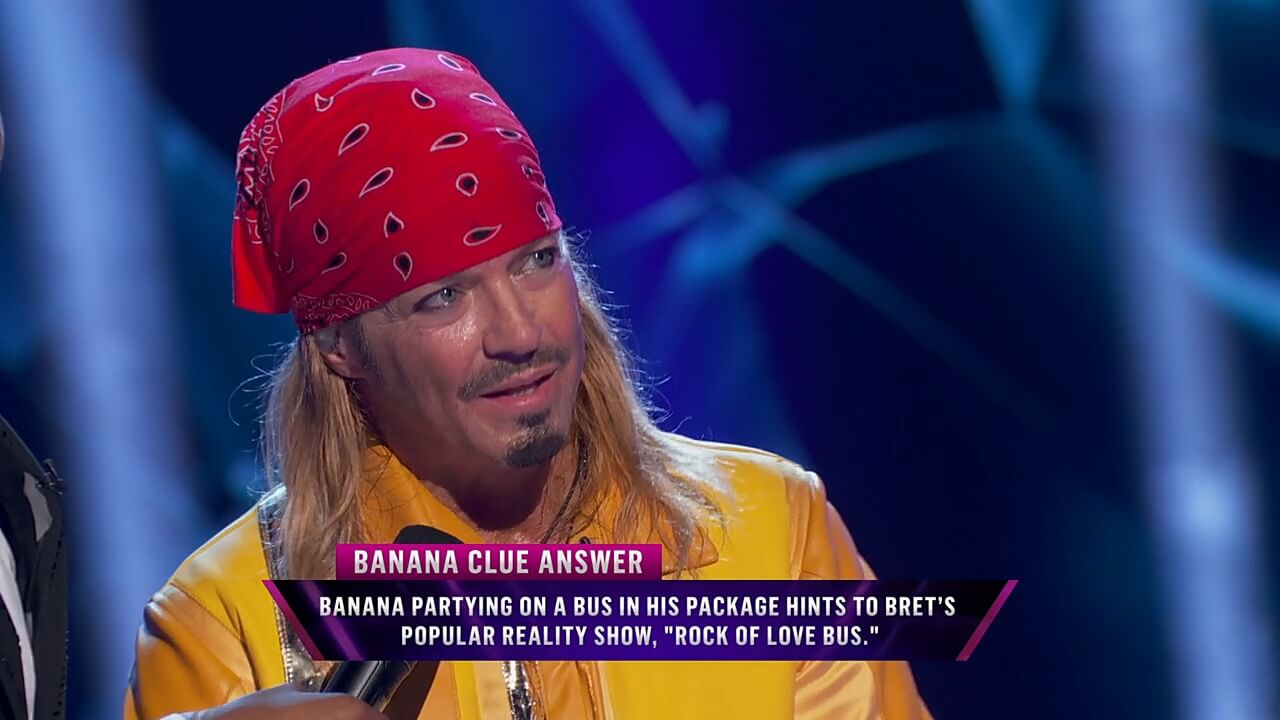 "Bret, did you choose to be the Banana?" asked Osbourne. The rocker responded, "I did!" 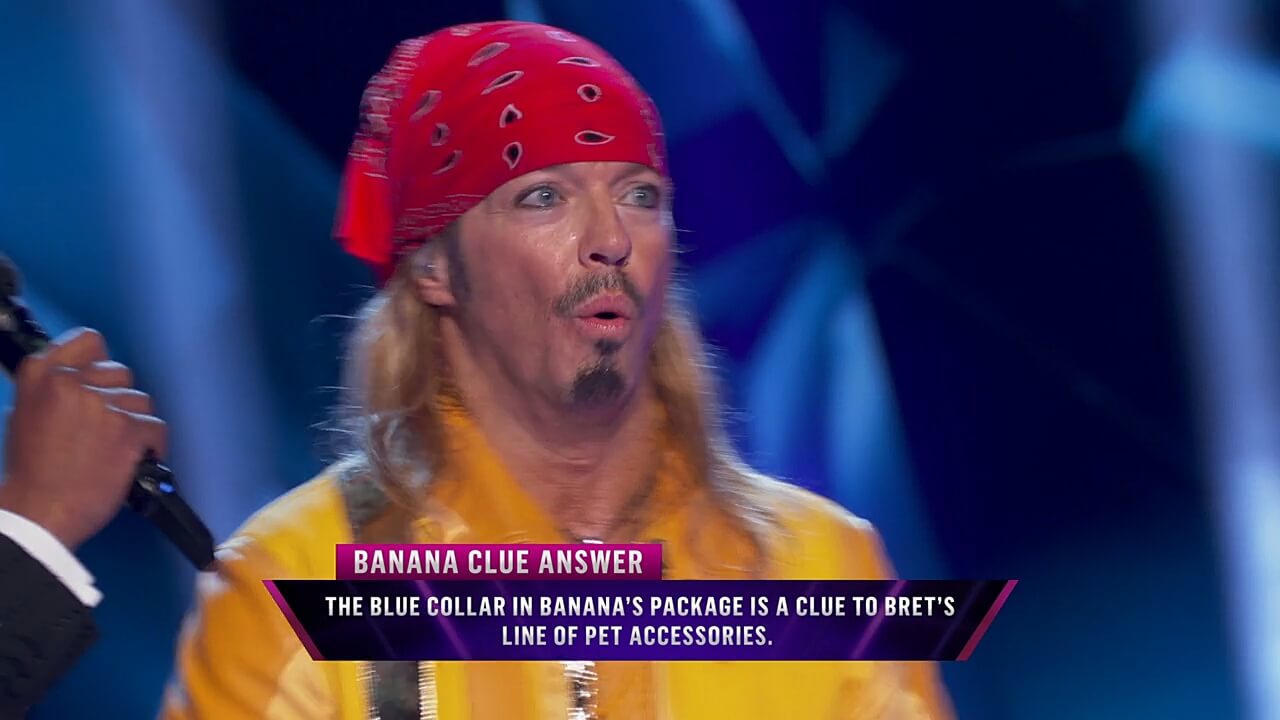 And though "The Masked Singer" was taped before the coronavirus crisis hit the world, Michaels seemed prescient when he said the show is "such an upbeat party – the world needs it right now." 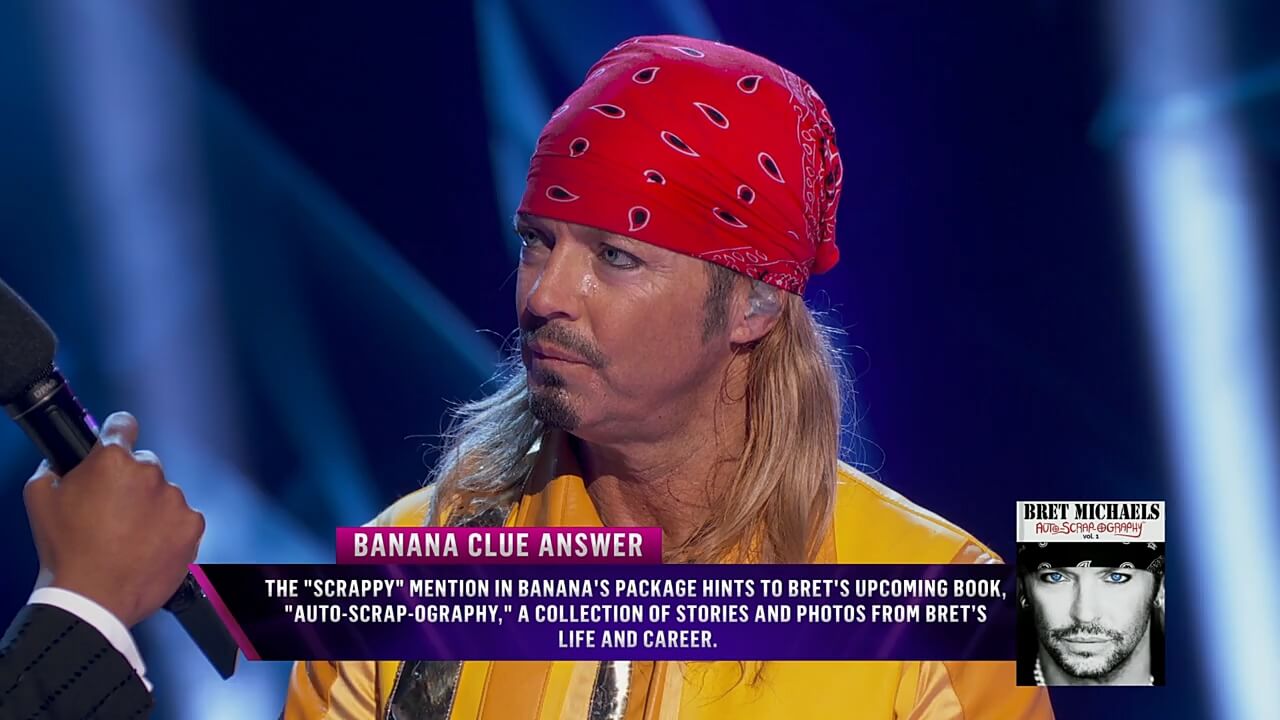 "I gotta tell you, I would have done anything to get here, this is the most awesome show," Michaels told Cannon. "I've never had such a great time." The episode ended with Michaels in Banana custome singing "Knockin' on Heaven's Door." 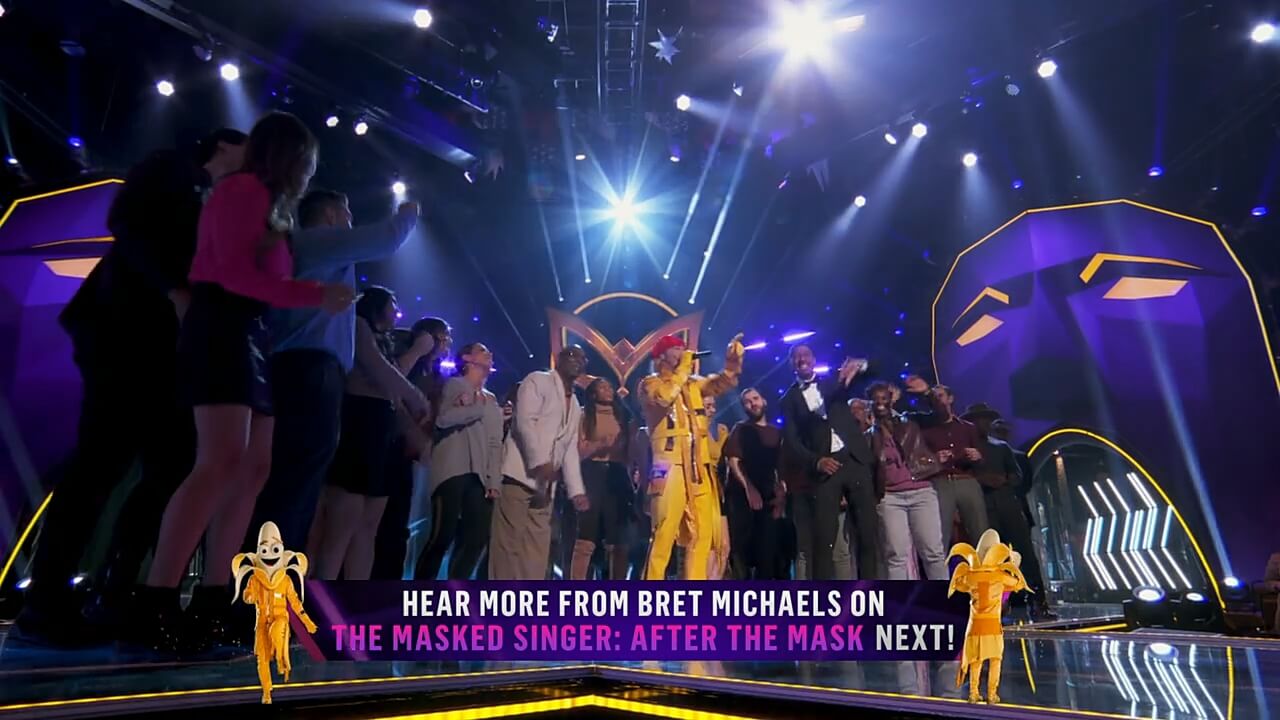